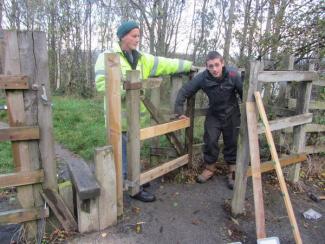 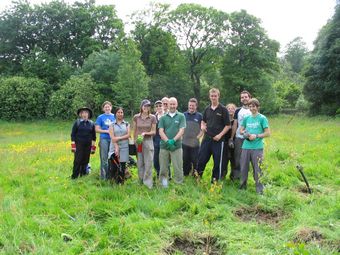 Environment Agency staff volunteering at Brackenhill ULABEES have a mangement agreement with the Council's Countryside and Rights of Way team to manage Brackenhill Urban Landscape Area. It is the area adjacent to Brackenhill Park in Great Horton and is managed to maximise the wildlife potential of the site. Our key jobs in the past year have been to repair the drystone wall along Greenfield Lane, to uncover and repair footpaths and steps and to control the litter and Japanese Knotweed.

In the forthcoming year we plan to further repair sections of pathway and to improve the quality of the pond. The Environment Agency carried out a survey of the pond last year and found, despite first appearances, that there is sign of invertebrate life in the pond. We hope to improve the amount of oxygenating and marginal plants.

Not quite the weather you would hope for for hay making! Drizzle and rain all day, and warm – the second week running the midges have been irritating (very irritating), so hooray for Sue has bought us some Skin So Soft which is a great repellent.

We really just wanted to concentrate on cutting and raking the wildflower grassland today. But inevitably we had to clear some litter first – including mattresses, baskets and the inevitable shopping trolley. We had to leave another trolley in the pond as we had not gone equipped, and there was a burnt out scooter that was just too heavy for us to get it up the hill to where the Clean Team collected our hoard.

We used the auto-scythe and hand scythes to cut the grass and then raked the cuttings to mulch the trees. There is plenty of knapweed, meadow sweet and meadow cranesbill and meadow vetchling in the grassland, and this management work will help preserve suitable conditions for these wildflowers to continue to thrive. 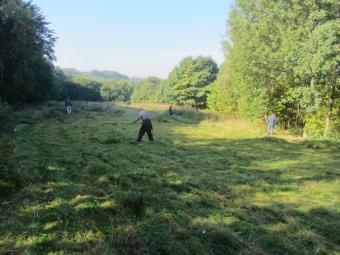 Our focus today was to cut the meadow in order that the flowers, and their supply of nectar for the insects, continue to thrive. There is a lot of Meadow Cranesbill, Meadowsweet, Knapweed and Scabious. The functioning autoscythe did a good a job of the main area, with the hand scythe being useful on the verges, though the encroaching brambles first had to be cut with loppers.

It is a shame that some inconsiderate dog owners are less than attentive to clearing up after their dogs, which made task of raking the grass unpleasant in places. Although it is October, the weather was more like that of traditional hay making season; it was hot work out of the shade.

We also cut the Japanese Knotweed near the gate and cleared a bit of litter. We were concerned to see that the pond was very dry. We know this has occurred within the last 10 days as we undertook a newt rescue last week to help a local resident who was worried about pollution in her garden pond, and its long term future. Rachel and Bella transferred 100s of newt tadpoles into the pond. Let’s hope the lack of water is short term and the invertebrate pond ecology survives.

The main task today was to cut the top areas of wildflower meadow, in order that the flowers continue to thrive amongst the grass.  We used the auto scythe to cut the grass and then raked off the arisings to reduce the build-up fertility in the soil.

There was also a substantial amount of litter to collect including four mattresses, a divan base,  a tent, sheets  and blankets. Thanks to the Clean Team for collecting these items and the numerous bags of litter.

In addition we cleared cut back some over grown hedging and mended the gate on Westcroft Road.

Today we were a group of 11 volunteers. See more pictures here 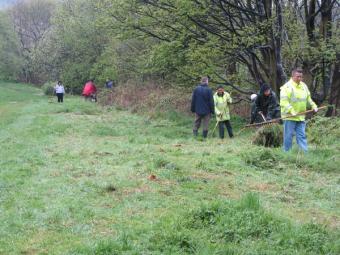 Our task today was to cut and rake off the meadow areas to benefit the grassland flowering plants.  First though we carried out some litter collecting. This involved retrieving tyres and a shopping trolley from the pond plus other large bits of rubbish scattered around the site.  We then set about main task, once the autoscythe got started. The grass areas were cut leaving the flowers that were making an appearance. We saw plenty of Meadowsweet, Celendine, Vetch, Cranesbill and a single Cowslip. This is all encouraging for a good show of colour during the summer with plenty of nectar for insects.

We were again supported by the Clean Team who collected the litter. The Council Wardens also made a visit, so we were able to discuss the suitability of a dog fouling bin for the site.

Today we were a group of 9.

We do not often move around in one day but felt a couple of sites needed a visit but couldn't entertain us all day.

The itinerant volunteers started the morning at Reevy Mill Dam, cutting back overhanging branches, cutting the path and clearing litter. Before meeting the other team for lunch we made a visit to the BEES UNR, where again we cut paths and overhanging branches to ensure access is easy. The wood vetch is now well established and looks splendid, and we enjoyed seeing quite a few newts sheltering in the woodland.

The afternoon visit to the orchard was in response to the break in on Monday night. The door has been broken beyond repair so we wanted to make it weather proof until it can be replaced. Whilst there we cleared round some trees, mowed the paths and some grass areas and did a bit of weeding in the vegetable beds. The frost in May definitely damaged some blossom, but there are some apples on the trees.

We had to change the site today as the snow covering the tree planting site at Dewsbury Country Park prevented this task from going ahead. This task has been rescheduled for 1st March.

Instead we returned to Brackenhill to complete the task of removing willow that has been overhanging the pathway. As well as opening improving access the felling work has also opened up the hazel coppice on the field behind and inspired us to manage this in a more proactive way in the future. We were joined by the Council’s Countryside officers who chipped the branches that were too small to be harvested for charcoal. In addition they took away the old fence that served no purpose but was a hazard to passers-by.

We also did some maintenance of the hedge on Old Corn Mill Lane, to prevent it obscuring the road.

Today we worked with 13 volunteers 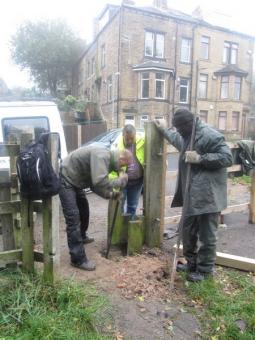 There were quite a few jobs to be on with today. One was to rehang the kissing gate, this was a difficult job as the old post had to be dug out first, but as it was concrete it had to be chipped out with a crow bar. By the end we had managed to get the new post in and holes drilled ready for the gate to be hung again. We also cut the meadow area at the entrance and cut the nettles and bindweed along the path and at the fence. This will make the site seem more cared for and allow other plants a chance to grow. The path along bottom of the site was cleared and this will make access easier for the public. But as we are still without our autoscythe the meadow did not get a full cut but we plan to in spring next year. This will benefit the wildflowers that are growing there like Meadowsweet, Meadow Cranesbill and Bird’s foot trefoil.

Today we worked with 10 volunteers.

Click here to see other photos of the day and site.

Making stakes for the hedgelaying tasks

Today 10 volunteers started the task of laying the hedge that is the boundary between the site and Corn Mill Lane. The terrain was difficult as the hedge is at the bottom of a steep slope and the fence prevented tackling the hedge from the flat side. However good progress was made and all volunteers had the opportunity to learn how to cut the pleachers, which act as a hinge, using billhooks and bowsaws.  We made stakes from timber cut at Boar's Well and the UNR and sharpened them to a point with a bill hook.

We will continue this task next week. 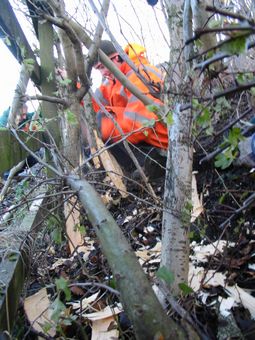 Today we had the chance to learn and practice the traditional craft of hedgelaying. We continued on from the section of hawthorn hedge we had started to cut earlier in the year. First we cleared the lower branches and the vegetation of the trees. We then learnt how to make a pleacher and next how to construct the hedge using stakes. The completed hedge should provide a stock proof barrier which was not crutial at this hedge but learning the technique is and how to create the increasingly rare habitat and wildlife corridor. At the end of the day we had completed about 30 yards which was a great achievement and final result looked very good.

Today we worked with 16 volunteers 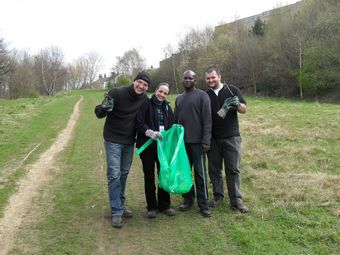 Today we had three jobs to carry out on the site. The fence at the bottom of Greenfiled Lane required repair. This occupied several of the group and at the end looked good. Another group set about maintenance on Greenfield Lane, which imvolved repairs to the wall, collecting litter and removing vegetation. The other volunteers went to clear litter and fly tipping from the site. In total 12 bags were collected from the site. There was unfortunate news, the bridge that was installed last summer was found in the stream.