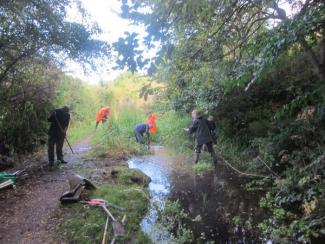 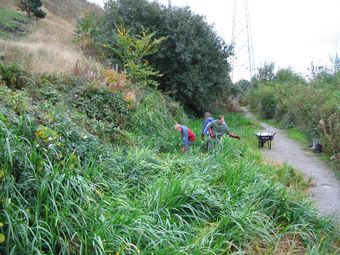 Boars Well pond clearance in Oct 2005Boars Well Urban Wildlife Reserve sits on the hillside above Canal Road. It is council land and the responsibility of the Countryside and Rights of Way team. . Our key tasks involve keeping the pathways accessible. BEES have been involved in the management of the Reserve for the past 8 years, controlling the spread of Japanese Knotweed and Himalayan Balsam, management of the wildflower meadow and the pond.

The Reserve is on a south facing slope and is a popular site for butterflies and birds. Kestrels nest on or near the site each year and can often be seen hunting over the hillside.

Some of the group made a start cutting the meadow areas around the site. There are four of different sizes to be tackled. As the entrance one still had some flowers in bloom, we started on the “picnic area” the scythes were put to work and the cuttings were raked off. It was here that we found lots of discarded beer bottles which took a good deal of time collecting and sorting to be recycled. The next area that we cut was the smaller area at the top of the site, which had suffered from bramble encroachment. But Scabious, Knapweed and Yarrow have been in flower this year. The bramble was cut back which will hopefully allow the flowers to spread next year. In the afternoon we started to cut the main meadow area, which this year has been dominated with Hogweed and Yellow rattle has been seen, we will finish this on our next visit. Other members of the group were busy too and pulled areas of Himalayan balsam, cut the path edges and overhanging branches and collected the litter.

Click here to see the other photos of the day. 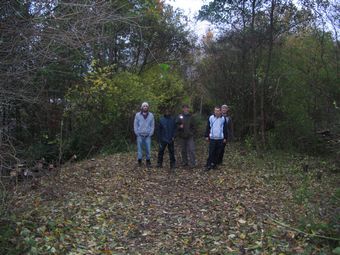 Some of the volunteer group at the end of the taskWe completed the task of removing the large fallen willow. This was quite a challenge with only hand saws. More dogwood was removed and we worked on other areas of the path to cut back hedge, shrubs and bramble to ensure the path remains accessible and inviting. We also used the auto-sycthe to cut along the path edge and clear grass and seedlings from the 'picnic area' near the centre of the Reserve. We welcomed 3 new volunteers today, amongst a group of 10 volunteers and 2 staff.


Visit the gallery to see other pictures from Boars Well