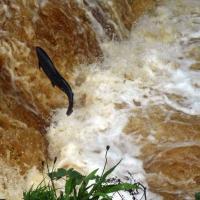 Today was a total contrast to our attempt to watch the leaping salmon at Stainforth Force a couple of years ago.

The salmon like fast flowing conditions, ideally a couple of days after heavy rain (so this was the compensation for a wet Apple Day event on Sunday), and a pleasant autumn day made for ideal conditions for the on-lookers.

We parked in Stainforth, started our day by looking at the moths and caddis flies on the toilet block walls, and then followed the Pennine Bridleway down to the Little Stainforth Road. The botanist back-markers enjoyed the walls along the bridleway which were covered in a variety of mosses and lichens, whilst others made their way directly down to the river (with only one person taking a diversion to the café for a late breakfast). A dipper flew past as we arrived. Apart from this I didn’t really pay any attention to the birds today.

Salmon were seen at the lowest fall almost immediately, and we gradually got comfortable perched on the rocks to concentrate on staring at the water. It was an excellent display. The variation in size showed there were quite a few individuals attempting the feat of leaping up the three falls to reach their spawning ground near Horton in Ribblesdale. The smallest ones seemed very small and I wondered if these might be trout as we could expect the smallest salmon to be 2-3 Kg. These are known as Grilse and they only spend one winter at sea, around the Faroe Islands. The majority will spend 2-4 years in the seas around Greenland before returning to their natal river to spawn.

After lunch we headed back up to Stainforth for the mystery element of the day. We decided to take advantage of high water levels and to walk up to Catrigg Falls to enjoy the spectacle.  Donald and Alice opted against the steep ascent and stayed in the village, whilst the rest of us progressed at various rates up the hill.  Most of the group stayed at the top of the falls, enjoying the water and the Belted Galloway cows in the background. There was even a Harebell and some Burnet Saxifrage hanging on in flower (the most notable flower of the day was the vivid Herb Robert along the main track).

A few of us went down the slope to look at the main waterfall, and took the opportunity to look at the ferns and the distinguishing features of Lady Fern, Hart’s Tongue Fern and Maidenhair Spleenwort.

We didn’t give credit to Peter and Marje’s persistence and had assumed they had turned around before the gate to the falls. But they had just continued at their own steady pace and ended up at the bench in the next field, returning to the falls with a helpful passer-by. So, a slight delay to our departure, and a reminder that we should stick to our oft-repeated guidelines of waiting at junctions/gates.

Steve and Bob, as planned, had joined us watching the salmon having walked over the hills from Settle. We dropped them near the train station (but nearer The Talbot!) in Settle, before setting off for a smooth journey back to Bradford. Thanks to Stuart for doing all the driving.

There is an excellent selection of photos in the gallery.

Whilst watching the water a few of us were talking about the fact that Pacific Salmon have been found in the North Sea, expected escapees from Russian fish farms. We wondered about the environmental impact of this. The farms sterilise the fish; this article, which Bob has shared the link for, gives an insight into how it is done.