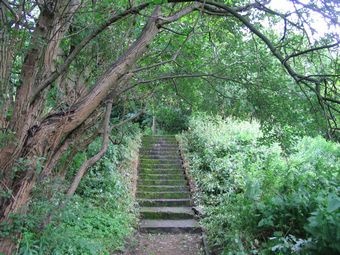 Steps after clearingToday there were enough volunteers to split into smaller groups. One group concentrated on making sure the pathways remained accessible at the central steps and then the lane from the school. The next group focussed on the invasive plant species, with two patches of Japense Knotweed and two patches of Himalayan Balsam tackled. The others concentrated on collecting litter, which although did appear too bad still managed to collect over 12 bags, including two from the pond.

Today we worked with 12 volunteers.