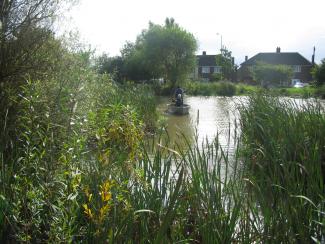 A large mill pond with nesting coots, moorhens and Canadian Geese that is popular with local fishermen. 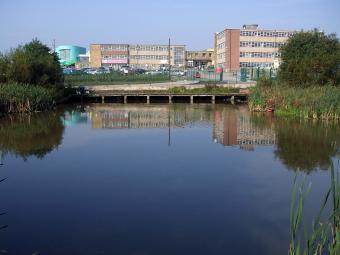 Reevy Mill Dam, looking towards Buttershaw High SchoolBEES manage this small wildlife space, adjacent to Wibsey Park, on behalf of the Council. Our main responsibilities are to keep the pathway open and remove litter. The grassland is managed to encourage wildflowers and the trees and shrubs are planted to attract wildlife.

The site, which is mainly a large mill pond with nesting coots, moorhens and Canadian Geese, is popular with local fishermen.

In June 2007 the Environment Agency carried out a brief survey of the pond. View the survey results

Captain Brass took able charge of the boat again today. Together with the enthusiastic assistance of David they managed to retrieve the accumulated litter from the water whilst others worked around the edge and in the grassy areas. Thanks to the Clean Team for collecting the rubbish.

We also cut and raked the grass, to benefit the wildflowers and cut back branches around the pathway. 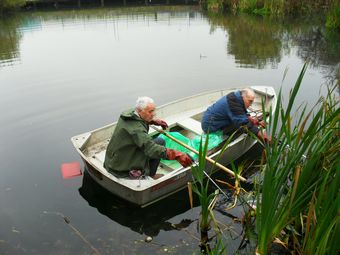 Today we once again combined with the Prince's Trust team, which gave us a good number of people on site. This meant that we were able to take the boat on to the pond to carry out some much needed litter clearance around the edges. It seems that not only was there litter that had been blown into the pond by the wind but we removed road signs and toys that must of been trown in. We also managed to get a good amount of the resurfacing work completed and was pleased with the result after the wacker plate had been driven over.

Today we worked with 22 volunteers.

Other photos of the day and the site can be viewed by clicking here.

A half day visit to both sites to continue with our management programmes of work. 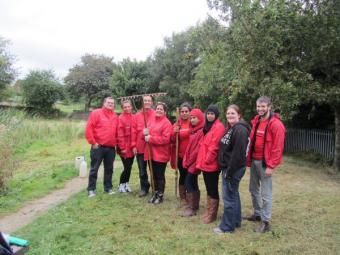 We were joined by a group of employees from Santander. This was a good thing as we had to cut the meadow areas by hand using our scythes and sickles. But the group was not overawed in fact the Santander employees enthused about not having to answer a phone all day. The majority of the people on site were either; cutting, raking, stacking or mowing the vegetation for the day and we disturbed many frogs from the grass, they will be able to find more shelter in the remaining long grass. We took the boat as well and were able to collect the litter, other general rubbish and fishing line that had made its way into the pond over the year since we last did it. Putting on the waders it was possible to clear the litter from the edges too. The Moorhens and Cotes will be grateful not to share their home with so much rubbish in future. The path edges and the perimeter hedges were given a cut back and this will make it easier to move around the site.
A very worthwhile day, that has prepared the site for the forthcoming months and our thanks to the Santander employees for their help.

Today we worked with 20 volunteers.

Proud bench installersWe have installed two new benches at the site. We chose to use recycled plastic and they feel very appropriate. We placed one at the head of the pond in a space that once housed a bench, but it disappeared long ago. We also replaced the rotten bench near the park. The final bench will be replaced later in the spring.

We also began to repair the path around the mill pond. This involved slicing the turf off the path surface to widen the path to about 1.2m. It had become so overgrown that it restricted anybody with limited mobility from using the footpath safely. We were joined by students from Buttershaw School, who worked hard to clear the path and to help with the bench installation.

There were six volunteers today. We started off in thick fog but by the end of the day we were in lovely sunshine, reflecting our satisfaction with the completed task.

View more photos in the gallery 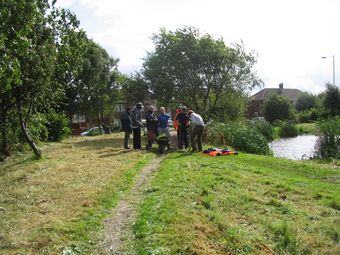 Reevy Mill DamThe day was spent cutting the grass and nettle areas and continuing to clear the path. We also had to remove some damaged tree branches.

Eleven volunteers worked today with a mixture of traditional hand tools - the scythes, sickles and hay rakes - and the auto-scythe with allows efficient cutting at the base of the vegetation.

We normally take our boat to the dam at this time of year to collect litter in the reeds, however today we focused on the waters edge and grassland. Several passers-by commented on the reduction for litter for the site.We appreciate the support of the Clean Team who collected the bulky waste. 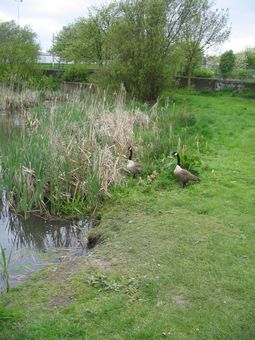 Canada Geese with goslingsToday’s visit concentrated on meadow management, this involved cutting some of the grass areas that are likely to be used by the public to keep the site accessible, while leaving other areas to grow long and allow the wildflowers to bloom. This will provide nectar for insects including butterflies during the summer. The site has benefited from regular litter collections but we still managed to collect a number of fly tipped items and general litter. After some further general maintenance we found ourselves in the unusaul position of completing our work. This gave us the opportunity to split into two groups one to visit Brackenhill to check the bridge and the other to visit BEES UNR to check on and remove the giant hogweed.

Today we worked with 12 volunteers

Click here and here to other photos of the day 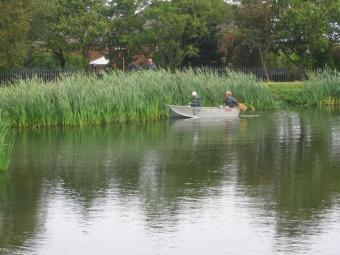 Using the boat to collect litter We took the boat to the site today so that we were able to collect litter that has accumulated in amongst the reeds. This is the least intrusive time of year for this as moorhens have successfully nested there for a number of years now. It proved very successful and with this and the other litter collected around the site we collected some 15 bags, a shopping trolley, 5 footballs and various bits of plastic toys. Other members of the team were able to make a start on the cutting and raking of the meadow areas. We worked using both the autoscythe on the large flat areas and the hand scythes on the smaller areas and around the borders. This work benefits not only the appearance of the site but will allow the ground flora to develop in particular the meadow cranesbill and vetch which make a good display of colour in the summer.

Today there were 15 volunteers. 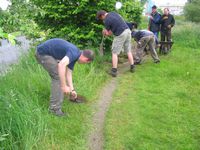 Today the group split to carry out work at two sites. In the morning one group carried out the finishing touches to the path and steps at the BEES Urban Nature Reserve. This was in readiness for the Breathing Places Open weekend. The end result looked very nice.

The rest of the group returned to Reevy Mill Dam and carried out work to install a bench, we now have three on site, litter collection and repairs to the footpath. There was sad news that a number of the fish had died at the pond, which is being investigated by the Council's Drainage Team and we reported it to the Environment Agency who suggested that the cause may be from lack of oxygen. But good news is that a pair of Canadian Geese have raised a brood of chicks, and appear to be developing well. Which was not surprising given the number of people who came to feed them during the course of the day.

I was pleasantly surprised to see so many people taking an interest in the wildlife at the pond. This is rewarding news for the volunteers who look after the site and for thanks for our 7 volunteers today.

See more photos of the day here and here 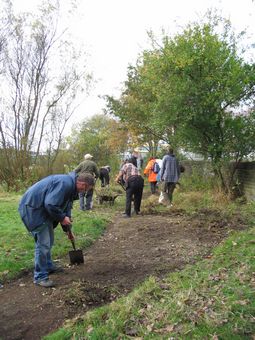 Today our group was joined by a group of young people from Prince's Trust and there was 26 people on site. Together we were able to make a real difference to the site and completed the task of stripping the overgrown turf from the path. We also carried out litter collecting, cutting the grass and pruning overhanging branches. This sets us up very well for next week when we will overlay a new surface and hope to complete the path improvement work.