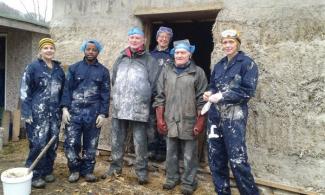 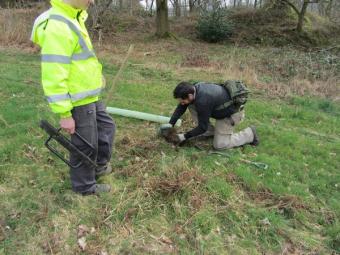 Today we travelled to Birk Crags on the outskirts of Harrogate to help Forest of Bradford with an ambitious planting scheme.

With a total of 8,000 trees to be planted in several fields we were able to make a contribution to an area of oak, downy birch and alder that was flanked by willow and hazel. There were still a few to plant when we left! All the trees needed deer guards, which adds extra work, but we like FoB’s new deer guard post driver that made the job easy.

In the afternoon the wind picked up as a reminder it is still mid-March. It was a longer drive home than our regular Fridays, and with fish and chip shops at nearly every junction I thought I was going to lose passengers to the temptation on several occasions.

location to be confirmed

To continue with the planting projects in the upper Aire valley catchment. 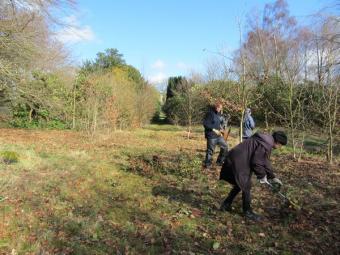 Today we joined with the Friends of St Ives to prepare an area that will become a meadow. It will be sown to commemorate the centenary of the First World War for visitors to the estate. Our task was to remove scrub from the area which was mainly brambles. We cut and raked the area, and with the cuttings created habitat piles. A machine will now be able to further prepare the soil ready for the sowing.

We also took our coppiced wood to the site, some of this was taken up to the kilns and the remainder will be pulled up the hill by the working horse.

Today we worked with 14 volunteers. 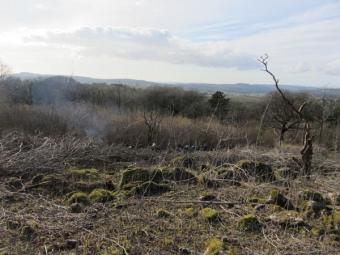 This was our third year running a residential supporting the Cumbria Wildlife Trust at their nature reserve at Hutton Roof. But the work site was on a different location to previously. We set off on Friday morning and were met by Wal the Warden who was able to load the tools and equipment in the trailer of his vehicle. The walk to the site was difficult owing to the wet conditions underfoot and the deep mud it had produced on the paths. When we got to site we were able to see the daunting task awaiting us. Coppice workers had cleared large amounts of Hazel from the limestone pavement; this had been stacked into windrows. Our task was to sort the piles into useful products like charcoal, firewood, bean poles, washing poles and walking sticks. Then burn the remaining brash. This clears the pavement to allow the violets to grow which is the food plant of the High Brown Fritillary. In fact last year other Fritillaries had been seen on the site as well.The plan is to develop a number of coppice coups around the site and then link them with limestone pavements by opening rides to allow the butterfly populations to move around the site. This is another of the tasks we started, which involved felling trees along a footpath track, but leaving strategic ones which are hand holds. We worked all through the weekend and could see a real difference in the work we had had done. But we would also need several more weekends to complete the work.

Our accommodation was at Arnside YHA which provided us with a great base. The weather was fantastic on occasions and meant we could work in t shirts, whilst at the same time seeing snow on the hills of the Lake District. The fires gave us a chance to cook potatoes for our lunch and we were joined by the regular CWT volunteers on Saturday to make a good group.

Already looking forward to next year.

We were joined by 14 volunteers for the residential.

Click Here to see other photos of the residential. 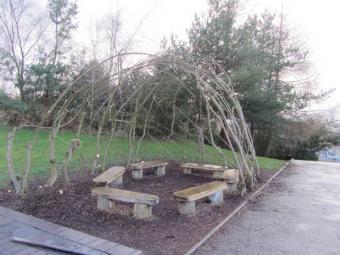 We were able to work in 4 different areas on site today. The willow structure that we started yesterday was reconstructed. This involved cutting out the old trees that had become inflexible and then replanting with flexible pieces of willow which were bent to form the shape of the structure. Then we constructed the side walls using thinner pieces of willow to weave between the uprights. At the end we had a willow structure which Negussie confirmed was constructed like a traditional Somali dwelling. We carried out the same process for the willow shelter over a seating area and in the nursery.

Whilst this was going on other members of the team were coppicing in the nature area. Several of the willow had started to grow sideways; this was causing more shade than necessary and overhanging the path. Several limbs were coppiced and were used to form a low barrier to define the pond. After several limbs were removed the space and the light to the area was noticeable and the barrier was beginning to take shape.

The outdoor facilities at the school are well developed. So for people who were new to the site it was an opportunity to show them how the outdoor education at the school has developed over the years and the potential it offers the pupils to get involved.

Today we worked with 12 pupils.

Click here to view other pictures from the day

Fenby Ave, BD4
Today we started to repair one of the willow structures that need repairing at the school. 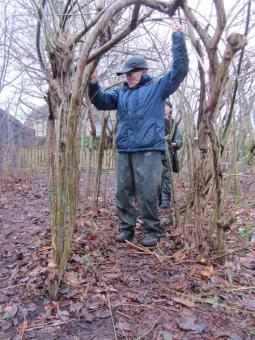 Really pleased to be back at the school site today. BEES helped to develop the outdoor classroom area in 2005 and now have been asked back to manage it to improve its potential. We started the visit with a brief tour of the facilities which are small and compact. But our task was to get the willow structure back into good shape as it had not been looked after for a number of years. We did this with a mixture of cutting, weaving and replanting. Towards the end of the day we were beginning to get to grips with the techniques and what we wanted the final shape to look like. Another couple of hours and we would of completed this apart from weaving in the diagonal side walls, but this can be carried out with the pupils at a later date.

Heavy rain again in the afternoon made conditions tough, let’s hope for better weather next week when we attempt similar work at Lower Fields.

Today we worked with 6 volunteers.

Click here to view other pictures of the day. 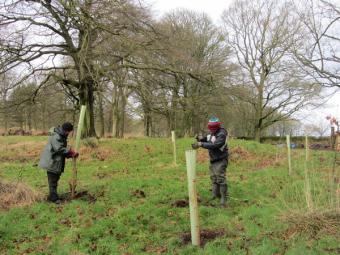 For many of the group this was their first time at the site, where previously we worked to create pathways and a class room area. Today though we were tree planting which is part of the management strategy of the woodland to improve it as a habitat. Formerly the woodland was grazed by cattle and as such there is little understorey vegetation, but canopy Beech trees which are reaching maturity and beginning to fail. We planted a mixture of Oak, Hazel and Birch particularly on the valley sides of the stream. These will restore the area to native woodland and provide an excellent habitat. The trees were guarded against Deer which graze the site to protect them as they establish. We also had time to replace some of the fencing and start to chop the fallen Beech trees.

Today we worked with 7 volunteers. 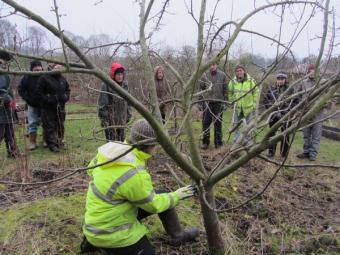 As part of the Apples for All project, horticulturist Andrew Chapman joined us to deliver some tree pruning training. There is a lot to learn and take in, but the more we learn and put those lessons into practice the better the fruit production will be in the future. At the same time other jobs were being carried out around the site, these included cutting the privet hedges, laying the native hedge and clearing encroaching vegetation. This will improve the amount of sunlight that is able to get to the trees and their fruit. The missing tree labels were replaced, now visitors can identify the trees and the label includes useful information like when to harvest the fruit. Considering the weather of heavy rain which set in before lunch it was impressive that the group kept going to get as much of the work completed as possible. But there is still more hedges to cut before the birds really get on with nesting.

Today we worked with 8 volunteers.

Click here to view the photos of the day 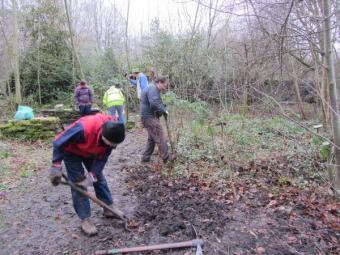 We planned to tackle several tasks on the nature reserve, today. After introducing the site to new people we divided into small groups to tackle the work. A group cut back the Laurel bush that we had started to cut several years ago. This will bring in more light to the site and allow the native whips planted to thrive. The decking platform which had become slippery and nearly unusable was covered in chicken wire to provide a non-slip surface. The tree identification signs were cleaned, replaced and repaired ready for visitors. Litter and fly tipping was collected from around the site, being winter it was more visible and unsightly than usual, so the place looked a great deal better with it gone. Finally we cut back some of the limbs of the Willow tree overhanging the top pond, this again will allow more light into the site and in turn benefit the pond habitat.