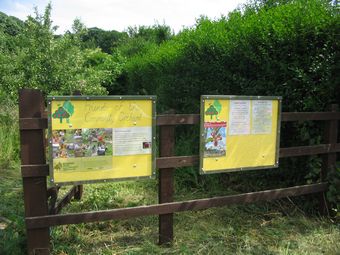 Friend's of notice boardsWe had aimed to visit both the Orchard and UNR today but there was really too much to do at the orchard to abandon it half way through. the day.

The grass is long and flowering throughout. Whilst this is intentional to allow habitat for invertebtates we chose to mow pathways through the grass to show intent and encourage peole to look around. The pathways and seating areas needed a little attention, but not as much as the veg beds. These were weeded and sweetcorn, pumpkins and tomatoes were planted.

The smart new display boards were mounted on the fence and now display information about our management approach and publicity for Apple Day. Sadly the new raspberries have not done very well, for no clear reason.

Staff carried out basic management of the UNR a couple of days later. I am pleased to report that there was very little evidence of Giant Hogweed with only a few small plants found in the woodland area. Fingers crossed.

User Forum After the task we gathered at the YMCA. Our first discussion was to gather ideas for a funding application for a future Community Wildlife project. Some interesting suggestions were made around more practical work and linking it to natural history education at sites, including work with families.

Then we discussed ideas for BEES 25th Anniversary celebration in September. We looked trhough old task programmes dating back to 1990 to identify which sites we would like to revisit. This wasn't a straightforward task as not all of the places were known to those present so it was hard to make an informed decision. However we came up with a 'long list' which will be used to plan a tour on 17th September, and maybe other dates through the year. We also decided to have a party in the evening, back at the YMCA. Expect your invite soon.