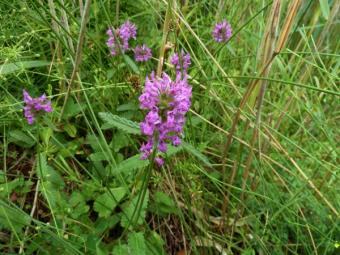 BetonyWe were so impressed with this reserve last time we visited that we ‘vowed to return next year’ according to the blog of the day.  Well, eight years later we did return and were equally impressed!

The fine warm weather of recent weeks continued as we left Bradford with a full minibus but increasingly it clouded over as we journeyed North up the A1 to Catterick Garrison so that when we arrived there was a much fresher feel to the weather which was fine for humans but not so attractive to the smaller flying beings.

Having surrendered a driving licence for a pass at the guardhouse we were allowed into the reserve to be welcomed by head warden, Steve, who gave us a very interesting introductory talk and an even more interesting guide to the ringing centre which is one of the foremost in the country.  This, together with the extensive visitor centre, is built to very high standards and both are most impressive.  Part of the criteria for funding for the reserve (they have two permanent staff and many volunteers) is that they should provide education facilities and they welcome over 100 schools each year.

Steve then walked us round part of the reserve before leaving us to pursue our own activities after lunch.  Many of our members availed themselves of the tea/coffee making facilities on site and marvelled at the quality of the toilets.

We then split up into different groups to explore the 100 acres or so of the reserve which comprises grassland, wetland, scrub and heath and therefore a rich diversity of species. Alice recorded 135 species of plant, 130 of which were in flower of fruit, and 5 ferns.  The highlights were: betony (in profusion in places), opening common fleabane, water plantain and both greater and lesser spearwort.  Top of the rarity list of ferns was the uncommon pillwort which failed to excite all but the most dedicated of botanists due to it’s looking just like lawn grass!

The coolish weather kept the numbers of butterflies down – we recorded seven species and there were not too many birds about either although the coming and going of the Army’s Chinook helicopters did put up a snipe at one point and this, together with siskin provided the ornithological highlights.  Sue’s intuitive lens located both emerald and azure dragonflies, unseen by most of the group and we also logged five day-flying moths together with lots of grass moths.  Purchases were made from the well-stocked shop including honey from bees whose active hive could be viewed from the centre.

An uneventful trip back to Bradford completed another very interesting outing.  Thanks to Alice for organising the day most successfully. See the photos here.