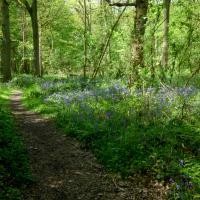 Today's walk in the Lower Wharfe Valley was completed in continuous sunshine in sharp contrast to our walk in the area completed on 5 May 2015 when it had rained. Consequently the spring countryside was at its best with trees in leaf and flower, the birds were singing, butterflies were on the wing and many flowers were in bloom.

Our walk started from the car park at Weeton church(architect Sir Gilbert Scott) and we followed a country lane, crossed fields into a bluebell wood, then took a riverside path along the River Wharfe. The walk could be described as "In the steps of the Bradford Botany Group" as several members had copies of the botanical list and accounts prepared by BBG members following their walk on the 27 April, all most useful for identification purposes.

In the lanes we examined the mixed hedges for hawthorn, midland hawthorn, hazel, holly, field maple, crab apple and hop. On the verges we found ground ivy, bluebells, greater stitchwort, lords and ladies, dog's mercury, garlic mustard, white dead-nettle and goldilocks buttercup. Also dove's-foot cranesbill was seen alongside the path as we headed towards the pack horse bridge.  The birds seen on arrival at the church included red kite; yellowhammer and whitethroat were seen along the lane.

On entering the woodland as anticipated the bluebells in the main had gone over leaving small carpets of blue where there was more shade. The ground cover was dotted with the red of red campion. The oval leaves of leopard's-bane thought to be Harpur-Crewe's leopard's-bane was seen near the entrance to the woodland.  Lunch  was taken seated on tree trunks scattered throughout the woodland. This was an opportunity to observe the surrounding wildlife including scores of orange tip and speckled wood butterflies [other butterflies seen on the day were:-small tortoiseshell, comma, peacock, holly blue and green-veined white]. Also a woodpecker was seen emerging from a hole at the top of a tree.

We continued our walk through the wood and adjacent field to descend onto a riverside path. A group took a short diversion to look for greater chickweed (uncommon in the north of England) which had been seen by members of BBG , however our group were unsuccessful and retreated having been warned by our leader of the potential hazard of steep slippery slopes above the river. The riverside produced some new flowers including garlic, Few-flowered leek and Sweet Cicely.In the field beyond were perennial cornflower and comfrey. Other flowers recorded by Alice (but not BBG) were Thyme-leaved speedwell, Cut-leaved geranium and Lady Fern.

We retraced our steps back to the car park and minibus.

To sum up 66 plants in flower were recorded, 27 birds and 7 butterflies.

This was a very satisfying ( but tiring day, at least for some) day out not far from home completed by 12 Bees members. For some it was a first- they were impressed, for others it was a return visit. Thanks to all, especially Stuart for driving.