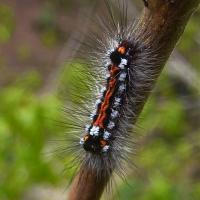 There were highs and lows in today's visit. With Stuart driving we left Bradford in cool drizzly weather heading for the Nidd valley near Knaresborough in order to see the Spring flora.  On arrival at the car park the newly erected height barrier prevented the minibus from entering.  The delay while an alternative parking  place was agreed upon provided the opportunity to investigate  the variety of plants on the roadside mound of soil. This we assumed had been brought from elsewhere and dumped during the recent improvements.

Our first attempt to reach the lower woodland through the trees was soon abandoned due to the conditions underfoot. We then followed the main roadway downwards. It was easier walking but the temperature dropped and the rain really started. We were thankful that we had not cast many clouts but were soon cold, drenched  and hungry. We soldiered on, led by Eric, negotiating steps, mud and puddles to reach the river bank. Suddenly the plant variety started to increase, the rain ceased and the remaining clouds lifted.

It was all change: the high points began, starting with a stand up lunch which began our drying out.
The performance of the day must go to a treecreeper.  Its tireless repetition of leaving and re-entering the tree hole and its tree bark searches for food starred in many photographs. On one exit Julia saw it carrying a faecal sac.  Birds on the water were Mandarin ducks and a Dipper.  A Red Kite and Buzzard flew overhead.  Chiff Chaff, Willow Warbler, Nuthatch and Chaffinch announced their presence.
Only one butterfly, an Orange Tip, was seen. Moths were represented by a brightly coloured larva of the Yellow-tail Moth.

The botanical highlights were Herb Paris, Sanicle and, new to all nine participants, Coralroot. This plant has an exceptionally short flowering period so we were fortunate to see a few remaining petals. The reproductive bulbils giving its species name, Cardamine bulbifera, were prominent and this feature alerted it as "different".   Wood and Greater Stitchwort grew side by side, a large patch of Wood Sorrel and smaller clumps of Pink Purslane were nearby. Forget-me-nots, white, pink and every shade of blue were abundant, most likely to be mainly the Wood type and a few Field ones but difficult to identify for sure.
Flowers on Oak, Ash and Alder trees, those on Pendulous and Wood sedges, on Greater Wood Rush and on three grasses together with a long list of other herbaceous plants produced a total of seventy-one. This total excludes the rare blue "Marigolds" being worn as glove protectors by one member!  Common Gromwell, not common, was found and should flower in June.

Thanks to all for their good natured acceptance and perseverance during the lows of the day and for the frequently offered help when necessary. Thanks to Eric for the venue suggestion and his leadership and to Stuart for driving us safely there and back.