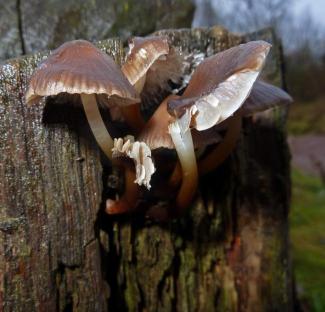 Our last outing of 2019 took us to a reserve we have visited many times, RSPB Old Moor.  On this occasion our minibus was almost full as we welcomed to our midst newcomers Joy and Bruce and also the return of Robert.  The weather was not on our side as we left Bradford with rain accompanying our departure and greeting our arrival as well.  Fortunately this did not last all day and by the time of our departure, things had improved considerably.

Today, after a brief introduction to the reserve, we all forged our own paths meeting up at various points as we took in the sightings of the day.  Water levels, as expected, were high after South Yorkshire's recent heavy downpours, so waders were virtually non-existent.  A number of shovelers were seen as well as wigeon, teal, tufted duck, pochard and shelduck.  Goldeneye were also in evidence.  A goldcrest was spotted by Maddy and Robert noted a kestrel hovering, on the look out for prey.  In the Family Hide a few of us watched as a peregrine falcon caused panic amongst a flock of lapwings, swooping in with the hope of a kill.  No success this time though.

Unfortunately no tree sparrows were seen but the hide nearest the Visitor Centre provided a wealth of activity in the middle of the day - coal, blue and great tit being noted along with greenfinch, chaffinch, goldfinch and reed bunting - in fact the day produced a total of 33 sightings.  Fungi were also in evidence and John identified glistening inkcap, common inkcaps, turkeytail, hairy curtain crust,clustered bonnets, oysterlings and snowy waxcaps.

Many thanks to Julia and Kevin for successfully negotiating the motorway traffic.