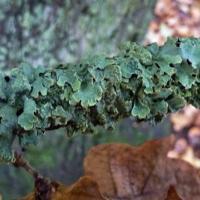 Created in 1888 and listed as Keighley’s ‘Hidden Gem’ the park is indeed a beautiful Arboretum, with a huge variety of interesting species, some of which cannot be found anywhere else in the area. A leaflet with a brief history and guide to the trees is available from Cliff Castle Museum.

Eight of us set off on a pleasant, if chilly, bright and dry November morning, unfortunately by the time we arrived it had deteriorated into a rather unpleasant cold, wet and rainy November day. Undeterred, with best foot forward, we set off into the park where there were some magnificent trees.

The first species to catch our eye was a Northern Chinese Red Birch whose bark, despite the rain or perhaps because of it, glowed vividly in the cold November light.  Another specimen, I think unusual but not marked in the guide, to come under discussion was a small tree with ferocious looking thorns and Rose hip type berries, it was identified as Cockspur thorn a member of the hawthorn family. Spring blossom produces a mass of rose hip like berries in the autumn, a feast for the birds, and with delightful colours of the  autumn leaves it provides interest for much of the year. The star of the day was the Weeping Beech, which, although it had already lost most of its leaves stood majestic outlined, as it was, against the sky and surrounded by a beautiful leaf carpet of its own making.Winding our way around the park passing by Maple, Ginkgo biloba, Larch, Lime, London plane, Fern-leaved Beech, Yew, Red Cedar, Weeping Ash and many others we came to the oaks a highlight of the park. A couple of weeks ago these had been magnificent in their autumn finery, sadly the recent weather had done it’s damage and the leaves were on the ground making distinguishing some of the species a little difficult. These included Red, Scarlet, Turkey, and Hungarian Oak as well as a Grand Common Oak, over 200 year old, but hey-ho the colours of the leaves were a joy even if they were not still on the trees. A park to be visited several times in a year to see and enjoy the best and variety of all it has to offer.

Lunch time. We made for the conservatory at Cliff Castle. From here some decided to continue the afternoon by looking at the fossil collection on display in the Castle museum, while some took the opportunity to continue the hunt for fungi which had got off to a good start by the sighting of a ‘Chicken in the Wood’ (see photo) in the arboretum during the morning. Species found in Cliff Castle grounds included, Clouded Funnel, Trooping Funnel, Candlesnuff, Sulphur tuft, Hairy curtain crust, Honey fungus, Ganoderma sp, Mycena Sp, Exidia SP, Coral spot, Peeling Oysterling, Orange Peel, Turkeytail.

Bird life was scarce but we did see and hear a flock of Redwings in the trees at Cliff castle which may have been just arriving on migration given the wind direction.

Please visit the gallery to share pictures of the beautiful trees and autumn colours.

Our sincere thanks to Sally for leading and to Kevin for driving, both as usual doing a much appreciated job for us all.