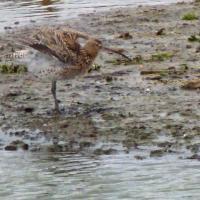 Alert leader John had read on the day before our trip that Blacktoft Sands RSPB Reserve, our original destination for today’s expedition, had been closed due to flooding and so took the wise decision to switch the venue to North Cave Wetlands, a YWT reserve where we were likely to see a similar selection of birds.  North Cave is an ever-evolving reserve based on a worked-out sand and gravel quarry with on-going adjacent extraction that will eventually form part of the reserve.

Bearing in mind last week’s wet trip to Skipton Woods and a weather forecast that wasn’t too optimistic, it was with some trepidation that ten hardy souls ventured forth into the heavy spray of the M62 heading east.  Five hours later we were all well pleased with our day.

Although rain was falling on our arrival it was no more than drizzle and we were able to take advantage of the hides that this reserve affords.  After making use of the eco toilets and the first shelter where we had views of seven Egyptian geese and the briefest glipse of a passing unidentified damselfly we made our way down Dryham Lane where our scope immediately came into its own and gave us good sightings of a whinchat which occupied us for some time.

The hedges down the lane were full of fruit of various kinds with an occasional plant in flower, although Alice wasn’t doing a list this week.  We saw a great-spotted woodpecker flitting from post to post as well as different water birds and an elusive wader which we were unable to ID, but which might have been a green sandpiper. The south hide was not very productive and was facing the wrong way to afford shelter from the prevailing wind and rain but we had a much better experience of the large East hide where lunch was taken.  Here we had good sightings of more water birds, lapwings and late-departing swallows hawking over the water.

After lunch we continued our tour of the reserve in much brighter weather and with more plants appearing Alice couldn’t resist starting a list.  The fruit-bearing trees attracted much attention and we reminded ourselves once more of the difference between alder and alder buckthorn, and did we see two or three different alders?  A buzzard was seen, as usual being harassed by a crow, adding to the growing list of bird sightings.  The flowering ivy was an attraction to wasps and other feeding insects, one of their last chances of nectar this year and the red turning leaves of one of the many spindle trees gave a spectacular display.

Although when we started we had agreed an earlier than usual departure time in view of the weather, in the end we had lingered far longer than we had planned and so had to hurry so as not to be late for our departure and not everyone made it to the corner hide where we again had good sightings of a whinchat plus eleven snipe, two green woodpeckers and three curlew.

We were surprised at the end of the day to find that we had recorded 45 bird species while Alice’s list had extended to 46 herbaceous plants in flower, the highlights being Fiddleneck, Black Horehound, Black Nightshade, Field Pansy, Storksbill, Canadian Fleabane, White Campion and Common Centaury. John’s eagle eyes found a variety of fungi including Inkcaps, Fieldcaps, Puffballs, Psathyrellas, Conocybe, Marasmius and one he hadn’t seen before, Ivory Funnel.
A surprisingly enjoyable day out ably led by John with Stuart and Kevin sharing the driving.