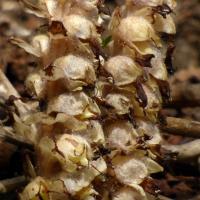 We sped through the Dales of Wharfedale and Bishopdale in the minibus before arriving at our destination Wensleydale with its limestone scars, green fields, sheep with lambs and of course waterfalls. The party of 13 arrived at the Yorkshire Dales National Parks information centre at Aysgarth Falls in mid morning. The staff had kindly assembled information about the dormouse introduction project started in 2008 for ourselves. The dormouse population is doing well in this special coppice hazel woodland habitat. As well as monitoring the dormouse population, work has been undertaken to extend their range by planting hedgerows, a corridor between the two Wensleydale sites. Dormice are in a state of torpor between October and April. They are also nocturnal. Signs of their presence that we could look out for are the nest boxes (at shoulder height with a hole in the rear) and the broken,hazel nut shells.

It was a lovely day and we proceeded through Freeholders wood an ancient mixed woodland with coppiced hazel, also an SSI.The ground flora was a delight with carpets of wood anemone white and pink in colour, dogs mercury, violets, bluebells also Early purple orchids, goldilocks buttercup and bird cherry. Marsh marigold, marsh valerian and water avens were seen in the wet flushes. The grassland areas contained barren strawberry, lady's mantle, bugle, cowslips and primroses, spring and glaucous sedges. Toothwort was spotted on descent to the Lower Falls. Here we were able to enjoy lunch, in sunshine, overlooking the terrace of waterfalls in full flow. Dipper and sandpiper were seen. Butterflies were on the wing.

We continued our circular walk across fields then uphill with views of Knights Templar which we had previously visited with Martin. Floral interest on the way included parsley piert, the speedwells (6). An exceedingly majestic tree attracted the group's interest. Was it an Acer? Our route took us through a farmyard with a splendid mock orange bush- some small flowers but mainly in bud. At the top of the hill there were views of Castle Bolton shrouded in mist. Also a long hedge had been planted ( the local farmer was somewhat disappointed that his land had not been included in the scheme more from the financial view point I would guess).The hedge was intended to be the corridor for the spread of the dormice.

Bird life was somewhat disappointing perhaps it was because I am not all that familiar with bird song which seemed to increase as we reached our base. Blackcap, song thrush, chaffinch, black-headed gull and a buzzard being mobbed by crows were seen. Oystercatcher and lapwing were viewed on our journey. However a variety of butterflies were observed including orange tip, small tortoiseshell, peacock and holly blue also bumble bees in flight and an unusual bee fly.

Our return path crossed St Josephs wood a plantation of 15 year old ash trees, before entering Freeholders wood again. On arrival Alison had an "eureka" moment, she had spotted herb paris! Once we had our eye in plants were seen amongst the dog's mercury in good numbers .Also we were interested in looking at one of the boxes built as a nest box for dormice. 65 plants in flower were recorded by Alice and 3 ferns. It was a good day out with all round interest .

We returned to the visitor centre in good spirits, for some excellent refreshments and for others an extended walk to view the Upper Falls. My thanks go to our drivers Stuart and Julia, to Alice for her support and to the National Parks staff for their friendly assistance.