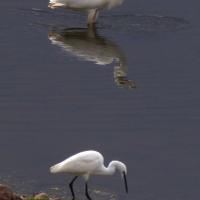 We set off from Bradford on a cold April morning. Sunshine, showers and low temperatures were forecast. Our journey via the A1(M) took us first of all to Nosterfield Quarry, the sand and gravel extraction site operated by Tarmac. As extraction has ceased the quarried areas have naturally filled with water in the form of lakes which have attracted a variety of birds and other ecological interest. The surrounding grassland is based on magnesian limestone which supports a unique collection of plants.

Following a visit to the excellent small visitor centre, the party of nine followed the path along field margins and woodland to two large lakes and then to a viewing screen overlooking the Reed bed. On our walk we heard and saw chiffchaff, greylag and Canada geese, tufted duck, goldeneye, gadwall, great crested grebe, little grebe, redshank, little egret, sand martins and buzzard. At the Reed bed a rather unusual duck sporting a bright orange front was seen. After much discussion and a check in Collins it was suggested that it was a ruddy shelduck, a native of Russia and a possible escapee from a wildlife park. Also seen in one of the lakes was a "mystery" bird which following  consultation with an expert Stuart informed me that it was a hybrid Canada goose. The early spring flora consisting of white and purple violets, ground ivy, red and white dead nettle and wild arum was a delight.

On our return to the minibus we made our way to Nosterfield Nature Reserve which is managed by the Lower Ure Conservation Trust for lunch. The plan was to do some serious bird identification from the main hide with its comfortable seating. Light conditions over the lagoon and grassland were good and we chalked up a lengthy list including little egret, oystercatcher(in good numbers),curlew, blacktailed godwit, gadwall, redshank, teal, lapwing (in good numbers), wigeon, pochard, shoveler, shelduck, little grebe and black headed gulls. Four buzzards were seen circling in the sky. The bird that created the most interest was identified as a ruff. Several of the group remained in the hide while others explored the reserve for its considerable botanical interest (also with the hope of seeing hares or even an otter). The emerging flora ( 27 species in flower recorded by Alice) included field madder, cowslip, barren strawberry, spurge laurel as well as the violets but not alas yellow figwort.  Also seen on one of the lagoons was a Great egret. I believe we have seen it there on previous visits.

It was good to see that the birds had a safe haven for feeding and breeding in the Lower Ure valley. It was an enjoyable day out for us all with considerable interest. Thanks to John for leading and Stuart for driving.