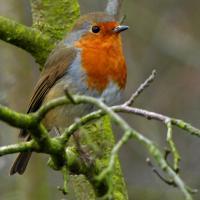 Owing to flooding at Wheldrake Ings we had opted for Fairburn today.

A second less expected change soon followed. As the minibus nosed out of the car park we were halted by Julia who had noticed a tyre was visibly deflating. Stuart and Sue quickly offered their own vehicles and drove the eight members to our destination.

The day was dull and damp. Due to the recent rain parts of the reserve were out of bounds and damage was seen to some of the paths. Never-the-less there was plenty to occupy us. Heading uphill along the Coal Tip Trail it became noticeably colder and windier. Recently the paths here have been fenced keeping visitors including dogs off the grassland. A beneficiary of this measure has been the Skylark which was both seen and heard. Green woodpeckers were heard here too. Reed bunting were numerous, Cormorants were fishing and Grey Herons flew over. Buzzards and Sparrowhawks hunted above. After forward investigation John decided that further variety was unlikely and we happily retraced our steps to the less windy and warmer level. Lunch was eaten in the Bob Dicken's hide along the River Bank Trail. The avian highlights were seen here. Thanks to Maddie's keen spotting skill, we watched an Avocet swimming and diving and  spied on the courtship display of a pair of Great Crested Grebe. Meanwhile a robin on a nearby branch spied on our sandwiches and  landed fleetingly on the window ledge. Most of the group continued along the trail adding Chiff-chaff to the record and later rejoined the strollers at the visitor centre. Here the feeders were attracting numerous small birds: Chaffinches, Greenfinches, Goldfinches, various Tits, Reed buntings, Tree Sparrows and more.

After reporting to the centre staff our avocet sighting and that of a sheep seemingly unable to right itself, we left for St.Aidan's nature park. Additional birds seen here were Meadow Pipits, Wigeon, Teal, Shoveller and Oyster catcher. In all 42 birds were recorded.

Seventeen plant species showed flowers. Coltsfoot, Primrose and Cowslips were a welcome sight. Blackthorn blossom decorated some hedges and one minute sprig of  Hawthorn was seen. Two Speedwell species, slender and ivy-leaved, showed their blue petals. The ubiquitous Hairy Bittercress showed fruit as well as flower although of more interest were the large patches of the tiny flowered Common Whitlow Grass. No further species were added at St. Aidan's.

Two surprises remain. Thanks to Maddie, again, Orange Underwing moths were watched fluttering around the tops of birches on which their larvae feed. For me however, the most unexpected sighting of the day was that of hares. These were brought to our attention by a warden  at St. Aidan's who kindly lined up the scope enabling us to watch them. Sue was delighted!

In view of the circumstances we could have cancelled today. Instead we had a most enjoyable day. Many thanks must go to Stuart and Sue for ensuring any visit went ahead, and thanks to John for leading at the changed location.