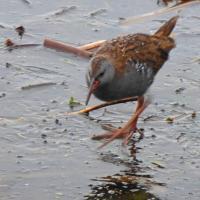 Julia had been keeping a close eye on local starling murmurations in recent weeks as she tried to decide where today's destination should be.  Notification was received on the day preceding our visit that Leighton Moss was the favoured site and so, on a misty morning, 12 of us left Bradford a little later than normal to visit this popular RSPB reserve.  Fortunately conditions had improved by the time we reached Silverdale where it was agreed that the Causeway Hide would be our first port of call.  As we crossed the boardwalk on our way, we were delighted to see a lovely display of scarlet elf cups, as well as various lichens on the trees nearby which caught Alice's attention.  Snowdrops had also been seen as well as polypody.

On entering the hide we noted the large numbers of mute swans on the water as well as a lone whooper swan just off the far bank.  Also present were gadwall, tufted duck, mallard, coot, moorhen, teal and cormorant.  A female marsh harrier was sighted on a couple of occasions flying low.  A group of snipe was observed in close proximity to the hide and a water rail showed well, scurrying quickly over the frozen edges of the water in search of food.  A flock of lapwing flew over and a number landed on the middle island.  The sighting of the day though was definitely an otter which showed frequently over quite a long period of time as it swam about catching fish and feeding,  Wonderful.

By this time we had consumed our lunch and the rain that was forecast was coming down quite hard, so the party split, some returning to the Visitor Centre and the remainder progressing to Lower Hide.  Here those of us that braved the rain had excellent views of a pintail as well as a number of goldeneye.  Snipe were again present and better views were had of the whooper swan.

Our ultimate rendezvous point was Lilian's Hide which the Visitor Centre staff suggested was the best vantage point to see any likely murmuration.,  The rain had fortunately stopped by this time so we all climbed the Skytower with fingers crossed.  Conditions had not been good and although the birds approached in groups of varying size, they were flying low over the shoreline so their murmuration needed to be seen through binoculars. I would describe what we saw as a series of 'mini murs', nothing jaw dropping but good to see nonetheless.  An excellent day, thoroughly enjoyed by all.  With many thanks to Julia for her efforts in tracking the birds and also for driving along with Kevin.  Thanks to Maddy also for all the additional nourishment she provided. See the photos here.