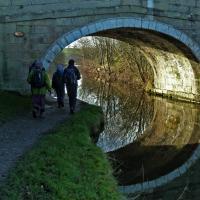 Nine members enjoyed a New Year walk of 4.5km. Led by Donald, we followed a circular route from Gargrave along the towpath of the Leeds - Liverpool canal and returned across fields along a section of the Pennine Way. Predictions from Donald of good weather, wet grass and mud were all upheld. Blue sky and sunshine accompanied us all day. The pace was slow, ideally suitable to admire the reflections in the canal and to appreciate the beauty of nature as a new year begins.After the razz ma tazz of a modern Christmas the peace and quiet were more than welcome. Lunch was taken in sunshine on seats by the Bank Newton locks

.While numbers were low, twenty two species of bird were recorded from large,three buzzards over the canal, to small, a wren seen by John. The largest group was one of gulls accompanied by several teal on a pond. We were stopped in our tracks by a noisy, smaller and less often seen group of tree sparrows.

Ten plant species showed flowers. Snowdrops and aconites were recorded along the towpath and a couple of celandines were seen in Gargrave churchyard. Others in bloom were twelve month flowerers. Other things noted were the lengthened male hazel catkins though not yet showing pollen, the large number of ash keys left on the trees and the abundance of uneaten fallen apples for the birds.Five fern species were recorded: Hart's tongue, polypody, maidenhair spleenwort, black spleenwort with copious unshed spores and a lot of young wall rue colonising the stone walls. The walls also supported a variety of Lichens. Candle snuff was the only fungus represented.

All members finished the day chatting and helping the local economy in the Dalesman cafe.

Today was a very pleasant start to our 2019 season. Thanks to Donald for leading with his well known efficiency and also adding to the species list, and to Sue for safe journeys in both directions.See the images here.