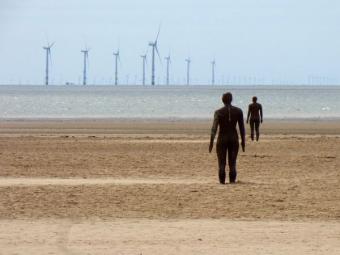 Crosby BeachOn arrival in Formby eleven members were warmly welcomed by Patricia Lockwood who again put her house at our disposal. Lunch in the garden soon followed. After Philip Smith's arrival we travelled to Crosby Coastal Park.This site occupies the southernmost area of the Sefton Coast. Philip and Patricia led us through the calcareous sand dunes their knowledge shortening the distance from one plant of interest to the next.

Due to the drought plant identification sometimes was a case of not, "What is it?" rather "What was it?". However, with our experts to help, we recorded a hundred species but with fewer in flower and more in the fruiting stage than would normally be expected at this time of year.

Crosby Coastal Park is renowned for its population of Evening Primrose. We concentrated hard as Philip showed us the diagnostic features of six types. Three were hybrids including the Triple Hybrid Evening Primrose, a rarity identified only as recently as 2016.  (For anyone wanting details of the hybrid crosses a sheet is available.)Sea Holly was prolific on the dunes not only producing a spectacular display but also supporting a huge colony of Common Broomrape. Patricia had counted over a thousand spikes of the parasite this year. Although its flowers had been a casualty of the heatwave, a few remaining florets showed the structure well. Another early dune coloniser, Sea Spurge, was plentiful. We were fortunate to see excellent specimens of the national, (and international), highlight - the Isle of Man Cabbage.  My 'Star of the day', a less colourful but equally splendid plant, was the Dune Wormwood. Discovered here in 2004, it is nationally rare and rare too in our identification books!

Other plants of interest were a deep purple Lucerne, White Melilot, Sea Radish and Hoary Mustard. The dried panicles of Sand and Sea Couch Grass were examined as was the even drier Rush Leaved Fescue. Finally the diminutive Sea Sandwort looking as fresh as ever with shiny green leaves in this hostile environment surely deserves a mention. Non-native species some most probably originating from local gardens added to the list.

We were so privileged to have Philip as our guide.

There was other wildlife present!  Seven butterfly species were seen: Common Blue, Ringlet, Gatekeeper, Holly Blue, Small Tortoiseshell, Peacock and Painted Lady.  Moths were represented by Silver Y and a large number of Six Spot Burnets flying, mating and in pupal form.  Beetles and Grasshoppers put in an appearance.

Not surprisingly few birds were on the wing. Among the seven species mentioned were Meadow Pipit, Linnet and Reed Bunting.

To end the record, mention must be made of the Smut around today. Did you see it on the dune grasses?

This was our hottest and driest visit yet to the Formby Coast.  On return to Patricia's house the tea refreshed us and the cakes sustained us for the journey home. We arrived in Bradford shortly before 8pm.

Thanks to Joan for organising the day, to Sue and Julia for coping admirably with the busy motorway traffic and to the cake makers for their tasty offerings. Again we are indebted to Philip and Patricia for all their input into a wonderful day. See the photos here.