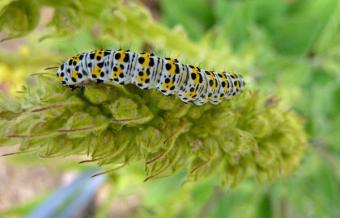 Mullein Moth CaterpillarThe June heatwave is still with us. Although the day began cooler than recently it soon warmed up but with a gentle breeze. However, as the day progressed the temperature rose to the mid-twenties. Luckily there was enough tree cover along sections of the site to provide our group of nine with much needed shelter.

The site has a toilet block. We ate lunch at the nearby tables.

This is the first time we have visited this YWT reserve, though I do remember coming here in the early 1990's with Butterfly Conservation. It is much changed since then as I don't remember any of these facilities.  There is a wonderful array of heathland plants due to the site once being used as a rubble dump from bomb damaged Hull. Plants just love this type of environment!

Over 100 plants plus 3 ferns were recorded, the highlights being: Viper's Bugloss, Dark Mullein, Yellow-wort, Agrimony, Evening Primrose, St John's Wort & Common Centaury. Some of these plants were seen in great numbers as were Teasels, Brambles and Nettles. Four species of thistle (Creeping, Spear, Welted and Marsh) also seen.

Butterflies were plentiful; Large,Small and Green-veined Whites, Speckled Wood, Ringlet, Meadow Brown, Gatekeepers, Small Heath, Small Tortoiseshell and Comma. Moths = Silver Y and Mint Moths (Pyrausta purpuralis). A lovely caterpillar feeding on Dark Mullein was instantly ID'd as that of the Mullein Moth. Not one I have come across before.

We left the site just before 15:00 which fortunately gave us enough time to make it home, via the awful traffic on the M62, in time to watch England's World Cup match. If we had left it till after 16:00 would we have still made it?

Many thanks to Julia who did the driving; not easy when motorways are involved.