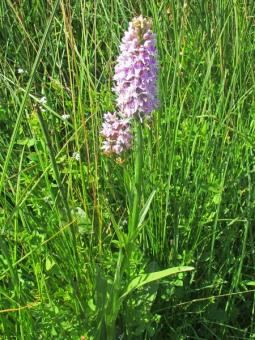 Common Spotted OrchidSUPER HOT just two words to describe the conditions for Bees first visit to Bingley South Bog. The temperature was 24 C with no wind, sunny and little shade. 12 people arrived by car/train/bus at our meeting point on John Escrick road. We were joined by Val Shepherd. Val and Susan Stead of BUWG have taken a keen interest in this site together with Les Barnett over many years. Joan gave us an introduction to this site which is a SSI and an area of fen to neutral grassland which developed behind a lateral moraine deposited by the glacier coming down the Aire Valley. The alkaline, alluvial soils here are extemely deep. The Bog supports a wide range of plants including sedges and grasses also the comparitively rare (for Yorkshire) Marsh cinquefoil and Marestail. Little management has been done of late. The tenant farmer brings his cattle to graze on the field from time to time. The Bog is fed by underground water from the River Aire and becomes  increasingly wet as the viaduct carrying the A650 Bingley relief road is approached. A pool of stagnant water was observed beneath the viaduct.

We descended into the Bog from the gate fighting our way through the dense vegetation of grasses and Meadow sweet. Insect life was very much in evidence with Chimney sweeper moths dancing over grasses. Large Skipper butterflies and Narrow bordered five spot Burnet moths were seen in good numbers. The flora was a mix of grassland plants and those which enjoyed a wet habitat. We recorded Marsh woundwort, Marsh bedstraw, Common spotted and Southern marsh orchids and hybrids, Square stemmed St John's wort, Ragged robin (one in a white form), Greater Birdsfoot trefoil, Floating sweet grass and Marsh cinquefoil (in a diminutive form). Honeysuckle was observed climbing the branches of a nearby tree.

Unfortunately while returning to the gate I was overcome by heat and needed to rest and seek a shady spot to recover. The others in the group proceeded to the pond where Alice and Joan recorded Broadleaved pond weed, Celery leaved buttercup, Lesser Spearwort (again in a diminutive form) Greater Bulrush, Field, Water, and Marsh Horsetail also Marestail.  70 plants were recorded in flower.

Following some discussion it was decided not to proceed to Bingley North Bog in view of the heat. We variously made our way home or proceeded to the shade of Bingley park to enjoy our packed lunches. It was suggested that a visit to Bingley North Bog combined with a canal walk could be arranged for a future date. Very many thanks to Sally for her supervision and support to myself. Apologies for the brevity of this account also the limited pictures in the Gallery due to unfortunate circumstances.