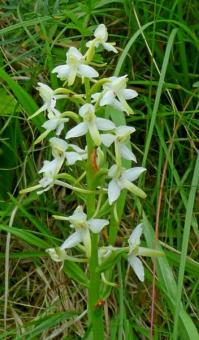 Lesser Butterfly OrchidOn a fine, albeit dull day, 13 of us left Bradford for our extended day out to Cumbria. Our first port of call was Little Asby where the search was on for the Small White Orchid and after a hasty lunch our quest began in earnest. The area in which this orchid grows was carefully walked by our team of eagle-eyed spotters but alas to no avail. In evidence however were fine examples of northern marsh, heath fragrant and heath spotted orchids with common blue butterfly being seen on the wing.

Waitby Greenriggs Nature Reserve was our next destination. This reserve was carved from the underlying carboniferous limestone during the construction of two railway lines between 1856 and 1861. One line was built to carry coke from the Durham coalfields to iron furnaces at Barrow. Both lines ceased operation in the early 1960's and the reserve now has a wealth of species-rich grassland habitat. On the lower branch line, conditions are wetter and hence increase the range of species the site supports.

As expected the site afforded an orchid bonanza: heath spotted, fly, lesser butterfly, northern marsh, common spotted, heath fragrant, marsh fragrant, common or chalk fragrant, common spotted and hybrids of northern marsh and common spotted orchids were seen in addition to marsh helleborine and common twayblade. The range was truly breathtaking and it was such a privilege to see the fly orchid at close quarters. From a personal perspective, the most impressive sight was of the marsh helleborines, not quite yet at their peak but nonetheless it was possible to appreciate the potential magnificence of their display in a few weeks' time. Truly wonderful.

Alice recorded 122 species in flower. Saw-wort was noted coming into flower, along with sundew buds opening in the wetter areas. Adderstongue fern was also seen. A ringlet butterfly was seen by Julia and there were plenty of chimney sweeper and Yellow Shell moths on the wing as well as an azure damselfly.

Our day finished in Settle where the majority of us enjoyed an excellent plate of fish and chips. Many thanks must go to Julia and John for their successful leadership and to Kevin, and Julia once again, for driving us so carefully to our respective destinations. See the photos here.