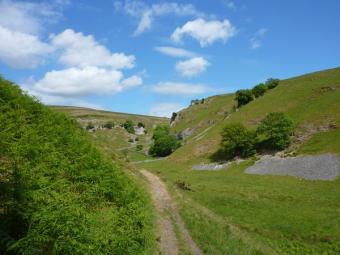 The Way to The GhyllOur forecast for the day was dry and sunny and we were not to be disappointed. The full bus went via the B6265 and this allowed a toilet stop at Grassington NPC and an easier route towards Parcevall Hall. We were also kindly allowed to use the car park inside the gardens so avoided having to park on the rather narrow roadside.

Our first and main destination was Tibet Woods which was a very short stroll back up the hill. This is a conifer plantation which is part of the PH estate and is said to contain a rare plant 'Chickweed Wintergreen' (neither a chickweed nor a wintergreen!). We had hoped to be met by the Head Gardener Phil Nelson, who had given us the permission to visit the site, but we did arrive later than planned so missed seeing him.

The only entrance is over a stone stile but all the group successfully overcame this first obstacle. We then headed upwards and went up and up and up; so much so that several members felt unable to carry on and retreated back down again. They had also been plagued by midges which didn't help. There were two zig zag paths to the top (where the plant was said to be located) and our group initially split into those going up the left hand route and those including myself who took the right hand path. Apart from the pine trees and splendid pink and yellow Rhododendrons there was little in the way of plantlife to be seen. However as we got higher the wood opened out and we then had great views of the surrounding area. I began to understand why it was called Tibet Wood!

It was Kevin, our new driver, who found what we were looking for. I had sent him out scouting with the single instruction to shout if he found any white flower! Well done to Kevin. We were soon joined by most of the others, some of who we only met as we were heading back down. All who reached the top did however get to see the rarity. The plant formed an extensive patch on the needle litter but only a handfull were in flower and looked rather small. I later learned that this patch is double what it was 2 years ago but this years flowering is poor, probably due to the dry conditions in May and June.

Our next destination was Troller's Ghyll, a site we have visited before and this is where we all ate lunch, albeit in four separate locations. This is a marvellous limestone valley full of interesting wildflowers such as Rockrose, Thyme, Common Spotted Orchids, Biting Stonecrop and Watercress. A total of 84 plants in flower were recorded by Alice plus 10 ferns in contrast to only 11 in flower at the previous location.

We rounded off a lovely day (the sun was still shining) in the cafe gardens where most of us partook of beverages and the excellent cakes. Our return route by way of a change was via Barden Bridge and Addingham. This route is definitely busier and therefore a trickier drive than our way there.

Many thanks to Kevin for driving.