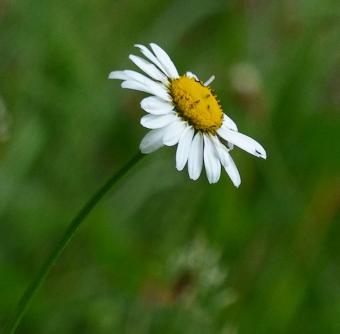 Ox Eye DaisyBoth sites visited today are owned by Ribble Valley Borough Council and were leased to the  Lancashire Wildlife Trust in 1989.  Each site is a former limestone quarry and covers twenty acres.

Salthill Quarry has SSSI status for its geology. Vast numbers of crinoid fossils are embedded in large boulders and fragments are to be found in the loose soil of the meadow floor. 180 plants, including mosses and liverworts, are listed for the site. Today, Joan and I recorded 104 in flower and 4 ferns. Bird'sfoot trefoil and Wild Strawberry were in profusion in the meadow area, Lady's Bedstraw was just opening and Common Milkwort and Thyme added variety in colour.  The woodland had white blossom of Hawthorn, Guelder Rose, Dogwood and Rowan. On the path side the one orchid we found remains unnamed; we missed John.

We walked along a very short stretch of the Ribble Way as it passed through the nearby Cross Hill Quarry.   Tiredness was setting in and a change of plan to reduce the distance we recced meant that we did justice to neither the plants there nor to the exhibits along the Bungerly Park Sculpture Trail. Some plants different from those at Salthill were noted: Black Bryony, Ground Elder in profusion, Red Campion and patches of Wood Speedwell. The two orchids we saw were most likely hybrids between Northern Marsh and Common Spotted. (Information from a Reserve employee) Once again, books were needed to check it was Buckthorn, and not Alder Buckthorn, we found in fruit.

Eighteen birds put in an appearance during the day. The most noteworthy were Swifts and Warblers.

In view of the flower bonanza perhaps it was the lack of sunshine that resulted in a disappointingly low butterfly count. Common Blue, Small Heath and both Small and Green Veined White did flutter past; one each of the first two and hardly more of the Whites.

As one of these reserves flanks an industrial site and the second is near a cement works, the variety of wildlife and the beauty within them is remarkable. I can only think that the 13 year delay in BEES returning to these sites is due to county rivalry!

Twelve members had a most enjoyable day, albeit over the border. Thanks to Sally for her efficient leadership and to Stuart and Sue for safe journeys there and back. See the photos here.