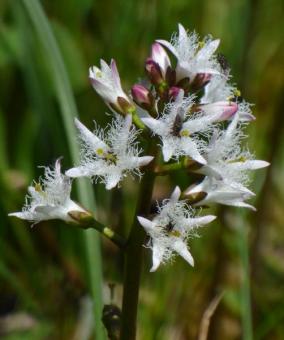 BogbeanOur three previous visits to this site, all in the month of August, were all abandoned before we ever got near to the boardwalk area! The plan this time was (A) go at at different time of year & (B) start at the boardwalk, rather than the mire at the southern end of the tarn. The plan worked perfectly as we had a dry day with warm sunshine throughout. There was however a keen north-easterly breeze which always kept the temperature below 20C.

The temperature was high enough however to tempt out lots of Orange Tip & Green-veined White butterflies. We also saw several Four-spotted Chaser dragonflies and Large Red Damselflies. Luckily we also managed good views of a solitary Green Hairstreak. The site doesn't hold much of its bilberry foodplant so only supports a small colony.

We heard lots of birdsong but they stayed mostly hidden from view. We did though manage to see a Sedge Warbler and a Tree Pipit. A few of us were very lucky to see a Short-eared Owl burst out of the undergrowth and just as quickly vanish out of sight. We didn't know what the large raptor was until we were told a few minutes later by two birders that they had just seen a shortie!

Whilst we were sat on the boardwalk having our lunches we were passed by a very large and well marshalled group led by two folk we know very well; Hugh and Lisa Firman. The group were all staying at Scargill House, a religious retreat near Kettlewell which our group has visited several times.

The boardwalk goes over Tarn Moss and Tarn Fen. Although set in a limestone area, a raised bog with an acid-loving flora has developed, so the site is botanically exceptional. Alice and Joan recorded 60 plants in flower plus 6 ferns and emerging Water Horsetail. These included Early Purple Orchids,Globe Flower, Bogbean, Cranberry, Sundew, Marsh Marigolds, Marsh Valerian and Lousewort plus English Scurvy Grass and Dioecious Sedge (both newplants for our two botanists). Additionally they also encountered an odd form of Water Avens just as they had done a week earlier at Threshfield Quarries.

We left the site at 14:30 and headed a short distance to the sink hole area near the large car park, hoping to see the Yellow Wagtails which nest there every year. Alas, no luck on that front! but we did get to see Mountain Pansies, Birdseye Primrose and Meadow Pipits. We left for home at 14:50.

Many thanks go to our joint drivers, Stuart and Sue. We also welcomed two newcomers, Sue and Jean who we first met when we visited Denso Marstons in April. Hopefully, if they enjoyed their day out, they will join us again. See the photos here.

Comment.  The peculiar Water Avens flowers we have seen on our last two visits are not hybrids. They are caused by naturally occuring mutations. It seems that there are many more of them this year than is normal. Alice.