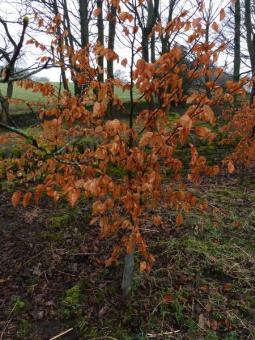 Marcescence On BeechA very wet morning did not deter Stuart from driving four other stalwarts to Thornton. On arrival the lure of the cafe was too great to ignore and an ideal place to meet Lorna, our leader, who then escorted us along the Sustrans Route.

Spring had visited but was not in attendance today. Fortunately the walk was on metalled paths although there was standing water on the verges. Only twelve plants were seen in flower. All year round flowerers were joined by Butterbur (male), Lesser Celandine and, surprisingly, Creeping Corydalis which was spotted by Maddie. Trees with flowers were Goat Willows showing both male and female catkins, and tufts of red stamens on Elm. Shrubs were represented by Gorse giving our brightest splashes of colour and Blackthorn in varying stages of opening.

Moss covered walls relieved the monochrome grey vistas and Maiden Hair Spleenwort was abundant on one bridge while absent on others. Fungi seen were Jelly Ear and the remains of what must previously have been an enormous puffball.

Birds were reclusive with sound being the trigger for most sightings. Eighteen species were recorded ranging from the diminutive wren to members of the crow family. A nuthatch and a green woodpecker may have been lurking but were not seen. The highlight of the day was the welcome sound of the chiff chaffs back here for the summer,

Young rabbits were the only mammal seen although we suspected that damage to tree bark may have been caused by deer.

It was a pity that because of the conditions the planned route had to be shortened.  Lorna's wealth of knowledge of the history and development of the area was much appreciated . We arrived back at Culture Fusion in the early afternoon. Thanks to both Lorna and Stuart.