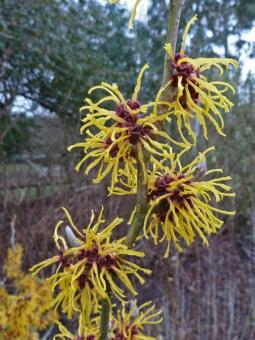 Witch HazelOn a bitterly cold morning 7 of us arrived at the Golden Acre car park to meet up with Donald, Margaret and Steve. Snow was gently falling as we set off for Breary Marsh giving an ethereal feel to our surroundings. Crossing the bridge we passed a couple of hazel trees resplendent with catkins. Closer inspection revealed a number of female flowers also showing. Through the woodland our bird sightings included of course a robin whilst a wren was seen flitting through the hedgerow. A great spotted woodpecker was heard drumming and was quickly spotted by Alice high in the tree tops. Birch polypore were much in evidence and a red kite was seen flying overhead. As we approached Paul's Pond 2 roe deer were noted running through the fields in the distance. Mute swans were seen on the pond and great and blue tits could be heard in adjacent woodland. On a previous visit Margaret had seen flocks of linnet in the fields leading away from the pond but none were in evidence today.

Our party then returned to the minibus to lunch in the relative warmth leaving Donald and Margaret to progress ahead to the Adel dam hide. On joining up later, we were rewarded with plenty of activity amongst the bird population. Chaffinches showed well looking handsome in their breeding plumage. Also seen were nuthatch, bullfinch, jays, long tailed, great, blue and coal tits. A late appearance by a male and female mandarin duck added to our enjoyment.

Overall the day produced a total bird count of 28. Julia did see and photograph a treecreeper and along with Maddy also saw a charm of goldfinches. Lots of liverwort was seen lining the stream and various moss species were also noted as well as 5 plants in flower, Mention should also be made of a witch hazel in the park which looked magnificent in full flower. A most enjoyable day with plenty to see. Many thanks to Julia for driving. See photos here.