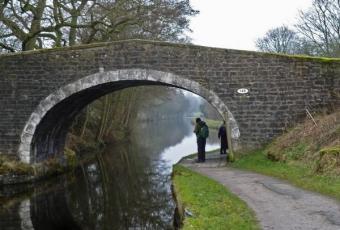 Along The TowpathAfter a festive season plagued by ill-health for many, exercise and fresh air were appealing. The mini-bus was more reluctant but was coaxed into compliance by Stuart and Julia and we set off on a still and murky morning for Lancashire. Ten members enjoyed the walk along the Leeds/ Liverpool Canal towpath between Foulbridge and Salterforth. Although cold it was dry and the footpath metalled instead of the muddy track some were expecting.

Being January wildlife was mostly quiescent yet even so stately tree silhouettes and tree reflections dominated the scene. While remnants of autumn remained on some ash and hawthorn twigs the new season's buds were swelling and early flowers, male, were seen on hazel. After much searching four other species with flowers were seen; the most surprising was one perfect example of Sticky Mouse-ear (normal flowering 4-10). Three fern species were recorded with Hart's Tongue in largest number. This had also colonised the inside walls of a disused lime kiln. The lime had been needed for mortar in the building of the Foulridge tunnel where liverworts flourished at the entrance. Mosses clothed the fieldside walls and in the spaces lichen were well represented. For some members the anastomosis of branches on an ash tree was a new sight. Velvet Shank, a common winter fungus, was seen and Coral spot.

On arrival we were greeted by mallard, mute swans and a pied wagtail. A heron was seen. Nine other birds were recorded although very few of any type. No visitors at the picnic table where five hardy souls ate lunch suggested that the birds too were feeling the cold. The other five chose the warmth of the pub and hot drinks as sustenance. For B.E.E.S this was a new venue. With a cafe at one end and a pub at the other it was ideally suited to our needs in January. Thanks to John for the suggestion and for leading. A return visit at a later date was proposed. Thanks to Stuart we crossed and returned over the county boundary safely. This must be a good omen for the coming year! See photo here.