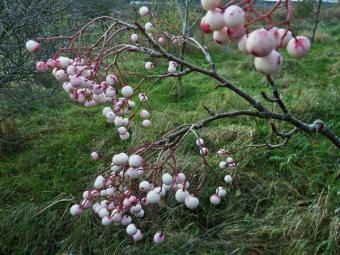 Sorbus speciesWhy do I enjoy a visit to Rodley Nature Reserve in late autumn? Several reasons - the varied colours of the trees, grasses, berries and lichens, the birds that are attracted to the reserve as a comfortable winter home, the welcome from the reserve's officers and the conviviality engendered on our visits. All these ingredients were present on our visit today. We began with tea/coffee and a mince pie in the Visitors Centre. Peter Murphy gave us an overview of developments on the reserve over the last two years which included the construction of two new steel hides with wheelchair access, the removal of old reed growth to create a younger reed bed more attractive to birds (not without considerable trauma), the development of Poplar fields as area of future woodland, an additional hide overlooking the Managers garden and considerable remedial work completed by volunteers following the flooding in 2015.

The work completed by volunteers on the reserve was impressive with Julia and her band lending a hand from time to time. However there is considerable concern with regard to the proposals contained in the Leeds Flood Alleviation Scheme which if they are accepted would mean that flood water could cover much of the reserve coming as far as the Visitor Centre. Much of the work and amenities of the reserve which is both an environmental and community resource would be put in jeopardy. We enjoyed a tour of the reserve in the morning accompanied by Peter and Barbara.

The bird life of the lagoons included Gadwall( increasing numbers), Tufted Duck( not doing so well), Wigeon, Shoveler, Little Grebe, Mallard ,Snipe, Coot and Moor "Water " Hen. Black headed Gulls were seen in good numbers with a scattering of Common Gulls. Numerous Herons were seen during the course of the day as well as Little Egret. Peter and Barbara reported sightings of four Water Rail from the Reed bed hide early morning. It was our afternoon task to track them down however we were unsuccessful. Numerous woodland birds were seen during our visit including a friendly Robin, Great, Blue and Long Tailed Tits, Bullfinch , Chaffinch, Reed Bunting, Jay and Wren. A flock of Linnets were admired circling over Tom's Field. Grey partridge were observed by the roadside on arrival at the Visitor Centre. There were a good number of both Grey lag and Canada Geese grazing in the fields. Alice recorded 27 plants in flower including White Heliotrope and Crown Vetch.

There were nine participants on today's trip arranged by Margaret with Marilyn backing up in the café. Our thanks go to Peter and Barbara Murphy for an enjoyable visit in pleasant and mild weather conditions.