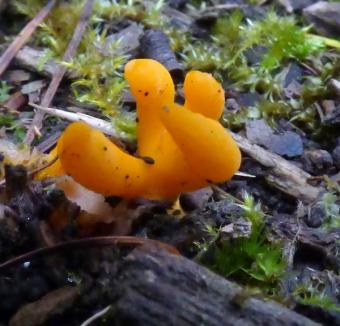 Clavulinopsis sp.We last visited this woodland, which lies adjacent to Angler's Country Park (4 miles SE of Wakefield), six years ago. The variety and quantity of fungi we discovered that day had left such an impression on Maddie she was most keen for the group to return again. During the planning process we picked a date closest to our 2011 visit that we believed maximised our chances of seeing the greatest numbers of fungi.

The weather was fine all day, cloudy but not cold, occasional periods of sunshine and a gentle breeze. We decided on a circular walk following the red trail. It soon became apparent that the volumes of fungi were way below our expectations. Whether this was due to the season starting earlier than normal (early August) or other factors who knows? The most notable absentees were the Fly Agarics; with only one washed out specimen being found. There was a very large one but that was made of wood! By the end of the day however the group still amassed a total of at least 20 species which was pleasing;

The most striking find was a Red-cracking Bolete in excellent condition though both Joan and I made a troop of Red-leg Toughshanks our favourite as we had never seen this species before. Other finds were:

Not many birds to be seen though Stuart did come across a Woodcock! Several mixed flocks were encountered but they were always high up in the conifers and the poor light made identification very difficult. Grey Wagtails, Jays and Robins were spotted and a few of us were treated to good sightings of a small rodent, most likely a Wood Mouse. Unsurprisingly no one saw any butterflies, moths or dragonflies. Our botanists recorded 30 flowering plants but no rarities.

Lunch for Stuart, Sue, Maddie and myself was taken in an open glade on fungi bedecked seats hewn from fallen logs. Robert, who had forgotten to bring his flask elected to head back to the cafe for his 'snap'!  Strangely the remainder of the group chose to have theirs in a gloomy section of the wood less than 100 yards away? and were uncomfortably seated on actual logs or even on the damp grass!

Thanks go to the joint drivers Stuart and Julia. It was heartening to have Robert back with the group after his operation and all clear and as a bonus he treated us all to sight of his 3 operational scars! A good job they were on his chest and not elsewhere!!