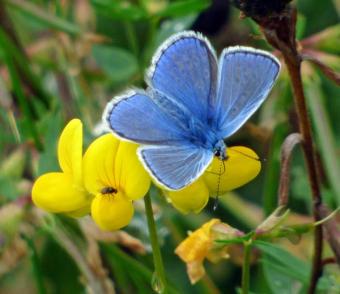 The weather forecast was not good for our first visit to St Aidan’s RSPB reserve since the re-opening of the visitor centre earlier this year and it ran true to form on our journey there.  St Aidan’s was created quite recently on the site of what was once Britain’s deepest open cast mine which ceased operations in 2002 and the car park is dominated by a huge open cast mining machine and the first bird of the day, a little owl, was spotted on the machine.

The attendance was low, the minibus conveying only nine people to the site and after collecting maps from the visitor centre we split into two groups, one botanising and the other mainly birding.  Rain continued as we made our way round the reserve which is quite exposed and offers nothing in the way of shelter but the botanists were able to lunch back at the visitor centre whilst the birders made for the sanctuary of the Swillington Ings Bird Group’s hide where they were pleased to accept freely-provided shelter for their lunch stop, although by then the rain had all but stopped.

Fortunately the one birder in the hide had located an osprey in a far away tree and we all got good sightings of the bird which eventually flew and provided a great spectacle. This was the highlight of a bird total of 34 for the day which included linnet, little egret, good sightings of kestrels which had successfully nested on the mining machine, and to the astonishment of Donald and Sally, several swifts – in September!

The botanists recorded 90 plants in flower or fruit with the highlights being trifid bur marigold, water-plantain, celery-leaved buttercup and creeping yellowcress.

As the rain cleared and the temperature rose, various insects took to the wing which attracted swallows, sand martins and to the amazement of Sally and Donald, several swifts!  The insects included six species of butterfly and three dragonflies

The visitor centre provided a meeting point for a snack before we left having had a rewarding day in spite of the morning’s rain.

Thanks to today’s leaders and drivers.