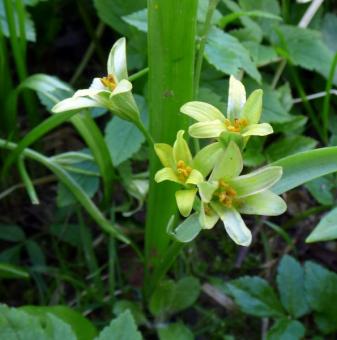 A perfect day out. We visited two very special sites. The southern bank of the River Ure at West Tanfield and the Lower Ure Conservation Trust at Nosterfield. Following a cloudy start the weather brightened as we sped on our way to West Tanfield where we were greeted with blue skies and warm sunshine on arrival. We followed the riverside path along the banks of the Ure through sandy soils and woodland. Once we got our eye in we saw a great number of spikes of the rare Yellow Star of Bethlehem. I think everyone would be able to identify the flower if we visited again. As well as its pale yellow flower it had an upright spade like leaf. There were spring flowers around also shrubs in flower or fruit from Ground Ivy, Wood Anemone, White Deadnettle, Moschatel, Wood Stichwort to Sweet and Dog Violets, Butterbur and Wych Elm. Alice identified a total of 36 species in flower for the site. The spring migrants Chiffchaff and Blackcap were heard, a Swallow seen, a Tree Creeper was nest building. Nuthatch and Grey Wagtail were also spotted.

On arrival at Nosterfield LNR some of us enjoyed lunch in the hide overlooking the Main Lake with the added comfort of sheepskin covered seats. Others sat on the grass outside. One of the characteristics of Nosterfield is the fluctuation in the water level from small ponds to huge sheets of water. On our visit the Main Lake was relatively small and surrounded by a vast area of grassland, prospective nesting ground for Lapwing and other waders. The bird list for the day was a phenomenal 50 bird species. There was a good variety of birds seen -Shoveler, Shelduck, Wigeon, Black-headed gulls, Redshank, Lapwing and Oystercatcher on the Main Lake. A kestrel hovered over the car park. A pair of Little Egrets were seen in the West Silt Lagoon and a pair of Great Crested Grebe were present on the East Silt Lagoon. A pair of Buzzards were seen circling the woodland. A Yellowhammer was seen on the fence by John.

Simon Warwick who was involved in the foundation of the reserve in 1997 gave us an introduction following which the group took a stroll according to their own pace and inclination around the half circumference of the reserve. The spring flora was superb and of great interest to Alice who recorded 35 species in flower for Nosterfield including a special plant Yellow Figwort, not seen there for many years and new to Alice. There was a long bank including Sweet Violets, Dog Violets and hybrids. The Cowslips were showing their yellow heads. Spurge Laurel was seen at the woodland edge.

Before our departure around 4pm  we were treated to delicious cake provided by Sue in recognition of her birthday. We then sped along the road trailing Simon to take a look at the Stinking Hellebore and Green Hellebore growing on the banks above the road. This was an excellent day enjoyed by a party of 15. Thanks to Stuart for driving also Alice for co-leading.