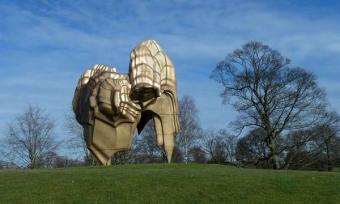 Fourteen members enjoyed a day of sunshine and blue skies at the Yorkshire Sculpture Park.  A few opted to concentrate on the sculptures and the galleries while most set off on a walk led by Sally and John. Some areas were out of bounds due to waterlogging. There was mud on paths near water features and we squelched in some grassy areas but no problems arose.

Buds were breaking on a variety of trees and flowers showing on Alder, Hazel and Wild Cherry while pollen fell in drifts from the male Yew catkins. The silhouettes of bare mature trees were magnificent.

Only white and yellow flowers were seen; fifteen species in total. The White Butterbur (Petasites albus) was the star of the show and a first sighting for most of the group. More common but equally welcome to see were Wood anemones, Barren strawberry, Golden Saxifrage, Celandines and the male flowers of Dog's mercury.

Of the fungi observed the most interesting were deemed to be Lumpy bracket and Willow bracket.

We lunched watching herons flying to and from the impressive heronry. Water birds recorded were great crested grebe, shoveller and goosander as well as many tufted duck and mallard. After the break three of us continued walking by the lake and were rewarded by the appearance of goldcrests, a song thrush and long tailed tits. Previously we had enjoyed watching a nuthatch sifting through the leaf litter.  The bird total was twenty plus.

The permanent exhibits with their diversity of form and materials provided animals ranging in simplicity from Amoebae (Prozoans) to rabbits as well as man (men). It was good to be among the first to visit the recently acquired exhibits by Tony Cragg.  A single grey squirrel was the only wild four legged animal seen.

Unsurprisingly the day concluded in the cafe where we re-met Margaret and Joan. They had opted for a less strenuous day and after short walks had used their energy working on programmes for the coming months. We also learned that Alan had joined the party but that there being two carparks had, again, caused confusion for car drivers.

Yet again Robert went beyond the call of duty by retrieving a walking pole left in the ladies cloakroom! The tired owner appreciated  conservation of  her energy.  Thanks Robert, for this and for our safe journeys and thanks to Sally and John who took over the leadership for the day.

Today nature and man-made features were side by side and both were appreciated.