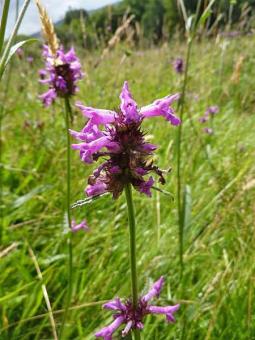 BetonyThe sudden local heavy showers of the day never reached Trench Meadows so we did not get the drenching of the past two visits to the area. There were two other differences from the norm today.

We made our own way to the assembly point at the school carpark on Coach Road. Some nostalgic comments were heard as, led by Vera, we walked up the path adjacent to the Glen Tramway and on to the moor. Unfortunately Bracken Hall Centre was closed but we wandered around the garden noting more plants in fruit than in flower. The centre's noticeboard was very informative about local wildlife events; perhaps BEES should be represented here. Retracing our steps our second difference was morning coffee at the cafe, rather than afternoon tea, before heading through the woodland to the meadow. Here Donald joined us making our total twelve. 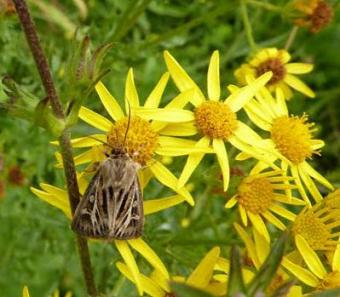 Antler MothListed as unimproved neutral grassland the meadow supports numerous plant species and rightly deserves its SSSI rating. The sloping terrain provides drier upper regions and lower wetter places. Seventy seven species were recorded in flower. Devilsbit Scabious was in abundance on the lower area, not quite fully open but none-the-less giving the meadow a blue tinge while Lesser Spearwort provided a yellow carpet in places. In the most boggy area we saw Meadowsweet, Marsh Willowherb, Brooklime, Water Mint and Water Cress. Elsewhere Betony, Marsh Ragwort, Tormentil and Trailing Tormentil, a large stand of Wild Angelica and a big patch of Harebells provided colour while a single spike of Marsh Arrow-grass added to the joys of the botanists today. Plenty of grasses,admittedly going over, some sedges and rushes and a single fern,Marsh Horsetail, added to our list. Truly we are lucky to have such a nationally rare habitat so close at hand. A short detour by some into the woodland confirmed that Common Cow-wheat is still present. The return along the riverbank revealed Arrowhead almost in flower and late flowering Celery Leaved Buttercup which had eluded us so far this year.

Birds were in short supply. A skein of Canada Geese flew overhead, a Goldfinch was heard and Robert -again- saw the electric blue flash of a Kingfisher.

Six butterflies favoured us including a co-operative Painted Lady who posed for all to photograph. Two well named Antler Moths were the most interesting of their kind.

A sit down and chat in well maintained Robert's Park ended the day mid afternoon. Thanks to Vera for arranging and leading our visit.